Reblogged from source with thanks @ https://arstechnica.com/tech-policy/2018/03/non-lethal-weapon-dod-seeks-to-use-lasers-to-create-shouting-will-o-the-wisp/ 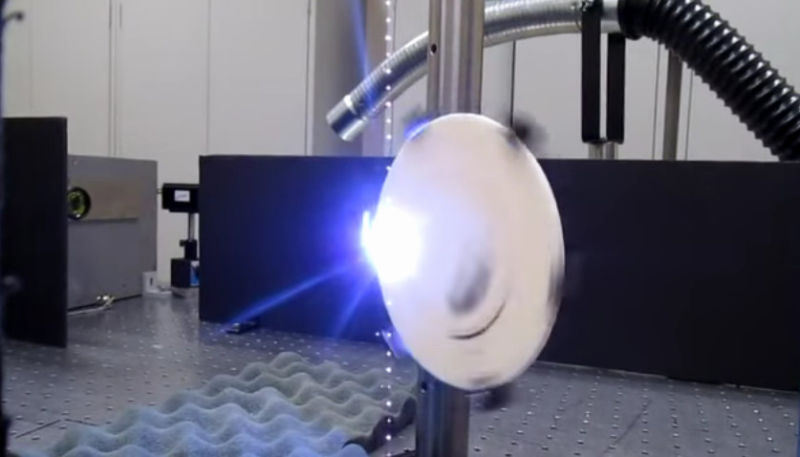 The Department of Defense’s Joint Non-Lethal Weapons Development Program (JNLWD) is closing in on a directed energy weapon that can literally tell people to go away—creating sound waves with laser pulses that can annoy, frighten, or otherwise send the message to people approaching a military unit that getting closer is not a good idea.

The Non-Lethal Laser-Induced Plasma Effect (NL-LIPE) system can be used to manipulate air molecules, creating a ball of plasma that oscillates to create sound waves with a stream of femtosecond-long laser bursts.

David Law, JNLWD’s Technology Division chief, believes that, within the next three years, the system will be able to create intelligible speech from a glowing ball of plasma hovering in the air at a distance. “We’re this close to getting it to speak to us,” Law told Tucker. “I need three or four more kilohertz.”

While it can’t talk clearly yet, NL-LIPE can create the equivalent of a stun grenade (or “flashbang”), and it could be combined with other non-lethal laser applications. NL-LIPE could also be used to scorch or burn clothing, as shown in this DOD video.

NL-LIPE is just one of a variety of non-lethal systems the military is researching to provide soldiers with “area denial” tools beyond the deadly kind. Other non-lethal weapons in development include the Active Denial System, a long-range millimeter-wave directed-energy weapon that “creates a heating sensation,” as JNLWD puts it, to keep crowds at a distance without causing injury. And the Marine Corps is acquiring a “hail and warning” device called the Ocular Interrupter System—a green laser system combined with a range-finder that can be aimed at someone up to 500 meters.

One thought on “Non-Lethal Weapon: DOD seeks to use lasers to create shouting will-o-the-wisp Laser-Induced Plasma Effect can create sounds up close and personal to scare off crowds – Reblogged from source with thanks @ https://arstechnica.com/tech-policy/2018/03/non-lethal-weapon-dod-seeks-to-use-lasers-to-create-shouting-will-o-the-wisp/”