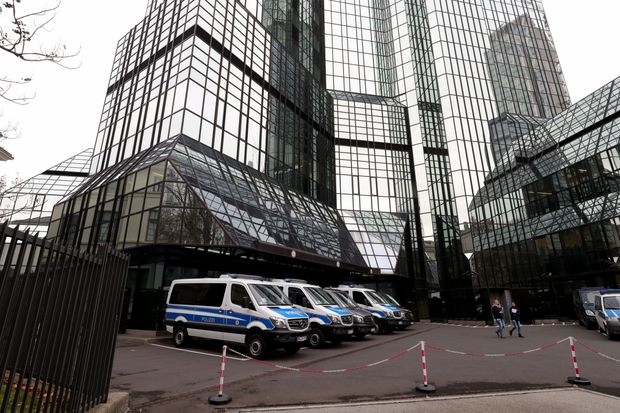 Officials said they seized documents during searches through six different Deutsche Bank properties. Police vehicles were lined up outside Deutsche Bank’s central Frankfurt headquarters at one point Thursday morning, according to photos posted on social media.

Around 170 police officers and other officials were involved in the searches, German authorities said.

The investigation includes a focus on two unidentified Deutsche Bank employees aged 50 and 46 and other unidentified employees suspected of helping clients create offshore entities in tax havens, the city’s prosecutor’s office said in a statement Thursday. They said their investigation is continuing. A spokeswoman added at midday that the searches might continue into Friday.

Deutsche Bank confirmed the investigation involving an unspecified number of the lender’s offices in Germany. The bank’s statement, provided after the searches, added: “The investigation has to do with the Panama Papers case. More details will be communicated as soon as these become known.”

The bank said it is cooperating with authorities.

In a second statement released at midday, Deutsche Bank reiterated that it has cooperated with investigations in recent years. “As far as we are concerned, we have already provided the authorities with all the relevant information regarding Panama Papers,” it said. It added that the bank will “cooperate closely” in this latest probe “as it is in our interest as well to clarify the facts.”

Deutsche Bank has faced a string of allegations and legal settlements tied to failures to prevent money laundering and related banking violations.

Deutsche Bank shares were trading down about 3% in Frankfurt after the raids became public.

A person close to the bank said its lawyers and executives aren’t certain of the full scope of the investigation, including whether it is solely focused on the so-called Panama Papers case, or could extend more broadly.

The Panama Papers relate to a trove of records revealed by a consortium of journalists in 2016 tied to a Panamanian law firm that specialized in offshore holding companies. The reports linked government and other public figures and company executives around the world to overseas assets in tax havens ranging from the British Virgin Islands to Panama. The records showed hundreds of millions of dollars in assets allegedly tied to hundreds of individuals.

The officials suspect that funds from criminal activities were transferred to Deutsche Bank accounts without the bank raising flags as required, the prosecutor’s office said. The officials said they were working based on information from Panama Papers documents and investigations.

—Ulrike Dauer contributed to this article.